THE BORDER: THE 500-YEAR OPEN VEINS OF THE AMERICAS

A few weeks ago, Truthout published a shorter and different version of this story under a different name. Here is the original and longer version, with the original opening. A few of the comments that had been omitted are found here. This is done in the spirit of the many hundreds of children who remain separated and or detained with their families: https://xicanation.com/the-border-500-year-open-veins-of-the-americas/ 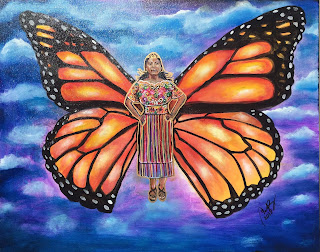 Those crying children, separated from their parents and detained for crossing the US border, are part of the original peoples of this continent. They symbolize all of the children that have been ripped away from their mothers’ arms since the era of colonialism.
To be sure, Donald Trump is doing what the US has always done best: destroying and dehumanizing nations and peoples; destroying lives and peddling pseudo-religious-politico providential narratives. However, this time, it is the US itself that is imploding and being slowly destroyed by a would-be dictator and a spineless and complicit Congress.
On this continent, the crisis at the border began in 1492, and there is a direct line that begins with genocide, theft of a continent, theft of bodies, souls and even identities — all of which resulted in the destruction and enslavement of many peoples and cultures in many countries.
For the rest of column, please go to: https://truthout.org/articles/those-impacted-by-colonialism-speak-out-on-the-uss-legacy-of-family-separation/
Posted by DrCintli at 5:09 PM No comments:

The Tucson Unified School District (TUSD) school board recently defended its decision to not re-implement the highly successful Mexican American Studies (MAS) program after Arizona’s 2010 HB 2281 legislation essentially banned the subject from the district’s schools.
The majority of the board contends that the district’s new “Culturally Relevant Curriculum” (CRC), introduced after 2012, is essentially the same as the terminated Mexican American Studies curriculum.
Their argument, however, neglects the fact that A.Wallace Tashima, a US federal judge for the District of Arizona, found HB 2281 unconstitutional in 2017, ruling the legislation was motivated by racial animus when then-Gov. Jan Brewer signed it into law eight years ago. It also neglects the fact that State Superintendent Diane Douglas said that the state would abide by the decision. Despite this, TUSD officials still refuse to reintroduce Mexican American Studies.
For the rest of the column, please go to: