TRUTHOUT: ''Cesar Chavez,'' Conditions in the Fields and the Struggle over Memory

I did not write a critique of the movie Cesar Chavez when it first premiered because I felt somewhat conflicted, and I didn't feel like jumping on a bandwagon. There appears to be a cottage industry of those who love to critique Cesar Chavez and the United Farm Workers (UFW) Movement, by people who have little first-hand knowledge of the events in question. From reading the many reviews, most of them seem to be formulaic, critiquing the movie as a hero-worshipping biopic, with deeply flawed acting, etc., etc.

Much of that critique comes from professional movie critics who know movies but who know little about Cesar Chavez and the UFW movement and know even less about the condition of farmworkers in this nation's fields. Some of the critique is along the same lines as that of his former enemies, many of whom are from the extreme far right and who always equated him or saw him as an enemy of capitalism and an enemy of the state. Some criticism is from the so-called far left, some of which is simply hypercritical, not necessarily wrong, but seemingly unaware of Chavez's larger role or value to society. Among these critiques, there is also valid and useful critique that comes from people with no ax to grind, primarily from human rights activists who lived that era or who are engaged in human rights struggles today.

What has been particularly troubling is that those who talk or write about the Chavez movie, almost never mention the conditions of farm workers today. It is within that context that I see/saw the movie. A 2007 book: The Farmworker's Journey, by Dr. Ann Lopez, gives us a glance not simply into the conditions in the fields, but examines the deplorable conditions that force migrants from their homelands to migrate to the fields in the United States. NAFTA, a trade agreement that permits goods, capital and executives to flow freely back and forth, but not workers, continues to be the cause of that migration.

For the rest of the column, go to: http://www.truth-out.org/opinion/item/24049-cesar-chavez-conditions-in-the-fields-and-the-struggle-over-memory#.U4p8JLhxsUU.facebook
Posted by DrCintli at 8:15 PM No comments:

TRUTHOUT: Ruben Salazar and the Filmmaker in the Middle

ON SALAZAR: After waiting some 44 years, most everyone I know was disappointed with the documentary on journalist, Ruben Salazar this past April. I wrote a series of observations prior to watching the documentary. Here's my view after having watched it.
http://www.truth-out.org/opinion/item/23884-ruben-salazar-and-the-filmmaker-in-the-middle
Posted by DrCintli at 10:03 AM No comments:

TRUTHOUT: Stepping Forward or Chaining Oneself for Justice 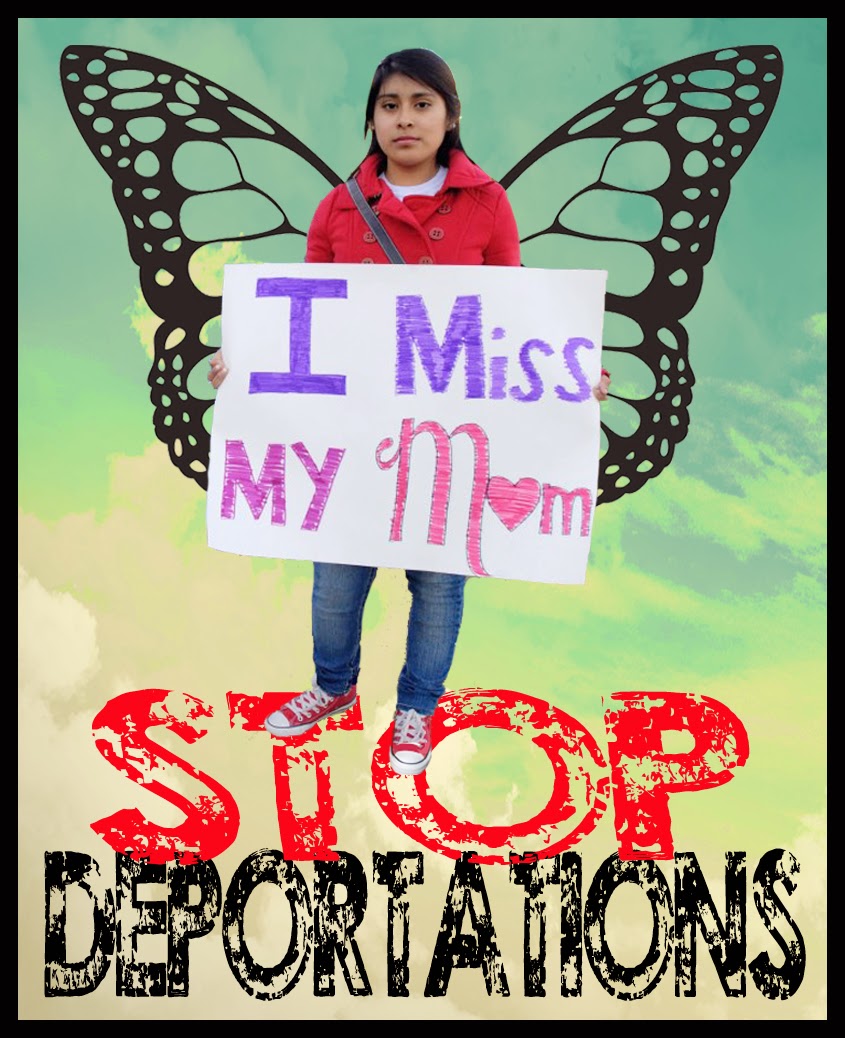 Last semester, the husband of one of my students was deported to Mexico. To see that battle ensue during the school year was not pleasant. I accompanied her to see lawyers that might help, yet in the end, all said he had no chance. He was deported and despite this, this semester, she graduated with honors.

Also, the previous semester, Cynthia Diaz, another one of my students, waged a very public battle to bring her mom back home after seeing her mother deported from their house in Phoenix some three years ago. Her public battle, which included a 6-day fast this semester in front of the White House, resulted in her mom's return into the country - as a political challenge to the Obama administration – and then her completely unexpected release.

I don't know if Arizona is different than other states, but in addition to DREAMers that are very public about their battles, there are also many students that come from families of mixed immigration status. In total, 15 of my students revealed to me this past academic year that either now or in the past, they too had to or were currently waging similar battles.

These are student projects from my classes this semester at the U of Arizona:

And the Ruben Salazar: Man in the MIddle Documentary blog:
http://rubensalazarpbs.org/blog/roberto-dr-cintli-rodriguez/

From the Cultural Nutrition Class

An Inspiration to Eat Healthy
https://www.youtube.com/watch?v=rQtWEMjRGdA

THE NORMALIZATION & DEBASEMENT OF CINCO DE MAYO: Please post and share and think about a coordinated strategy for next year. I thought the problem was with college students, but as can be seen in the following stories and clips, it is worse than shameful. Much local coverage nationwide followed the same theme... going to bars for this story.  I start with mine in which I argue we need to take back Cinco:
http://truth-out.org/opinion/item/23422-taking-back-cinco

Here's the college story from the Daily Wildcat which assumes that May 5 is Cinco de Drink-o and that it is a holiday dedicated to tequila drinking: http://www.wildcat.arizona.edu/.../kick-off-cinco-de...

This from CNN where story repeats the same -- while "admonishing" people to celebrate it right:  http://www.cnn.com/.../cinco-de-mayo-etiquette/index.html

ARIZONA ON FIRE: Found this little gem while I was going through my academic publications. Don't think it's been read in this country: This is an analysis of Arizona media during the battles re SB 1070 and HB 2281. The book, published in the Canary Islands, is titled: Reshaping Publishing in the Twentieth and Twenty-First Century. My piece is Chapter 3:http://cuadernosartesanos.org/2014/cac58.pdf#page=61

May 6, 2014
The Open Wound Called Salazar
By Roberto Dr. Cintli Rodriguez
Forty four years ago, a journalist by the name of Ruben Salazar was killed by an LA County Sheriff’s deputy, Thomas Wilson. Seems like a long time to look back, yet, his death in 1970 will forever remain an open wound. The recently aired PBS documentary, Ruben Salazar: Man in the Middle, while educational for those who were not around in 1970, does little to heal that wound.
Prior to watching the documentary, I posted four entries on the documentary’s website or blog (http://rubensalazarpbs.org/blog/). Now that I watched it, here is a fifth entry.
After writing about Salazar for some 44 years, I repeat, what is there left to write that hasn’t already been written? In watching the documentary, I felt the same way. Having lived through the era, and as someone who teaches the life and works of Salazar, I walked away feeling that the documentary did not actually probe into his death, but that it actually took a step backwards in promoting the law enforcement and mainstream narrative of the events of that era.
There were two major things that were wrong.
During that era, law enforcement, the LA Sheriff’s Department in particular, created the narrative that the protests of that day, Aug. 29, 1970, were primarily the work of outside agitators. Secondarily, they told the story, via the media, that it was the rally goers who became unruly and attacked the Sheriff’s deputies, and thus, law enforcement had no choice and was entitled to go in and restore order via billy club and tear gas justice.
The documentary, in effect, inexplicably and unnecessarily towed that line. In towing that line, it has the feel of “official narrative” – it has the feel of a Sheriff’s Department press release as opposed to an eyewitness account, or minimally, a critical account.
Secondly, after 44 years, the public was entitled to a full probe of the events of Aug. 29, 1970. If law enforcement and government refused to fully probe or make public its findings regarding the circumstances behind Salazar’s death, then that job fell to the media, in this case, the documentary. And probe it did, but not deep enough; it appeared to be of secondary import. Or as previously stated, it had the feel of another official Sheriff’s Department press release.
The year 1970 was part of en era in which the government seemingly directed all its resources to destroy all the progressive movements at the time. This included the Chicano Movement. The most well known coordinated effort was the FBI’s Counter Intelligence Program (COLINTENPRO). Perhaps the deeper probe took place by the filmmaker, but in the documentary, nary a mention of COLINTENPRO, the CIA or military intelligence or any other law enforcement program or agency that illegally and violently disrupted or attempted to destroy these movements, other than the Sheriff’s Department and a secret probe by the Department of Justice that found no prosecutable crimes, but that was nonetheless kept away from the public for more than four decades.
What we are left with by way of the documentary was a biography of Salazar, his journalism, a distortion of Aug 29, 1970, and the lack of a deeper probe into his death. And yet, realistically, if an agency was indeed responsible for the assassination of Salazar, it is highly unlikely that it would have placed the directive in writing and that the memo would survive to this day.
So the sum total of the documentary is that it does little to answer the pivotal question that most of us will to continue to ask, was he assassinated, and if so, by whom? Why does the question persist? The 44-year secrecy is one reason, but just as importantly, people still remember that his body was not removed from the Silver Dollar for at least three hours after he had been shot. And people can call it conspiracy theory if they wish, but it is legitimate to ask why his head was intact if he was killed by a 9-inch armor-piercing tear-gas projectile.
Our gut gives us answers and our memory also compels us to keep probing and asking questions. If anything, we can thank the filmmaker, Phillip Rodriguez, for keeping the story alive.
Rodriguez, a life-long journalist/columnist, won the 1986 Journalist of the Year Award from the California Chicano News Media Association in 1986 for his defense of the First Amendment, stemming from an incident in which he photographed the brutal beating of a young Mexican man in 1979. Today, he is an assistant professor at the University of Arizona and was the recent winner of the American Educational Research Association’s Ella Baker-Septima Clark Human Rights Award for his defense of Ethnic Studies. He can be reached at: XColumn@gmail.com
Posted by DrCintli at 11:59 AM No comments:

From no acknowledgment at all, to a proud celebration of "Mexican-ness," to a commercialized beerfest, Cinco de Mayo has seen many transformations in the last half-century. It is time to transform it again and recover meaning.

I grew up before Cinco de Mayo was celebrated in this country. I grew up at a time when Cinco de Mayo became a day that celebrated a victory (May 5, 1862) by an underdog, a ragtag Mexican army that repelled the invading French, the most powerful army in the world.

I grew up when people began to confuse Cinco de Mayo for Mexican Independence Day (September 16). Perhaps that's when the problem started, as I grew up at a time when that celebration transformed or was converted by beer companies into an excuse for excessive beer-guzzling.

I grew up a time when the words "wetback" and "beaner" were synonymous with the word Mexican. Those insults were uttered regularly in public and worse; it wasn't simply whites hurling those insults; many Mexican Americans were often the worst offenders, doing their hardest to show the world that they were Spanish or Americans, not Mexicans. They would never be caught dead speaking Spanish.

I grew up a time when the word Mexican itself was considered a high insult. It connoted being Indian. "Spanish" - a person from Spain - was the proper term. People sometimes apologized for referring to us as "Mexicans." That's kind of why the term "Hispanic" later caught on; it was the closest you could come to calling us "Spanish." Speaking Spanish was the ultimate telltale sign that they might be Mexican, the quintessential unwelcome foreigner.

I grew up at a time when the brown color of our skin was considered both dirty and ugly. It was a time when brown kids were shamed into wanting/wishing they were white.

For the rest of the column, go to:
http://www.truth-out.org/opinion/item/23422-taking-back-cinco
Posted by DrCintli at 9:09 AM No comments: