With the Idle No More movement in full gear, I was reminded by a conversation I had with elder Jose Lucero of Santa Clara Pueblo in New Mexico a couple of months ago. The document he passed on to me is self-explanatory. It is akin to the document recently released by the Zapatista Movement. This one is about the unity of the Indigenous Movement of this continent. It is about a historic gathering that took place in 2011. 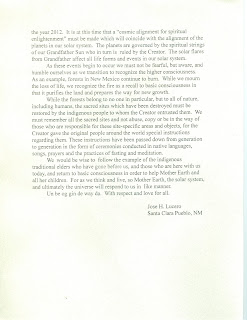 Posted by DrCintli at 2:24 PM No comments:

Vctory in Tucson: Visioning, Declaring, and Ensuring it


"It is not what we want, it is what we will."
- Tupac Enrique Acosta of Tonatierra, Phoenix

Consider the prism of Tucson's battle to defend Raza or Mexican-American Studies (MAS).
It has recently been suggested by some MAS supporters that MAS is now dead.


MAS is a discipline. For some, it’s a movement and still yet for others, it is a spirit. For me, it is a sub-discipline, part of the larger Indigenous story of this continent.


What perhaps is meant is that the former TUSD-program - as it formerly operated  - is now dead.


While that context is important, the issue here isn't to debate what has prompted these proclamations, but rather to give an alternate view because many of us around the country do not for one second believe that MAS is now dead. Subsequent to making these declarations, the parallel idea has surfaced… that we have not yet won the long battle against TUSD in our struggle to defend MAS.


The larger ongoing battle stretches back a generation, but the more intense battle began in 2006 when former state schools’ superintendent, Tom Horne, began his campaign to eliminate Raza Studies. Many of us have indeed declared victory recently, in part because the proposed desegregation plan that was submitted to the courts at the end of 2012 clearly calls for the expansion of Latino and African-American culturally relevant classes into all high schools within TUSD, plus classes at the middle and elementary schools. This comes amid several studies that affirm the success of the MAS department. More importantly, this comes amid that six-year movement to destroy - but also, to defend - MAS.


One can stretch credulity and call this a defeat (or a premature victory)… or one can seize the moment and declare victory. As everyone knows, the battle to defend MAS, has consisted of our community being relentless before TUSD and the state. Nothing has come to our community via sitting down.


The proposed desegregation plan is but part of the victory. The other victory is that now, an anti–MAS 4-1 majority, no longer runs TUSD. As a result of the November election, the board is now 3–2, pro MAS. After the new majority voted in a pro-MAS president and a pro-MAS clerk, the second thing they did was vote to withdraw objections by TUSD to the section in the proposed Desegregation Plan that references culturally relevant courses submitted to the court at the end of the year. Now, only the state (Attorney General Horne) continues to object.


One can look at these as piecemeal victories… because a complete victory has yet to be achieved. However, one thing is certain: school board members Mark Stegeman and Michael (Tea Party Man) Hicks are no longer running the board meetings or calling the shots. Anti-MAS board member Miguel Cuevas and the appointed board member, Alex Sugiyama, both also lost their seats in November and are now gone from the board.


At a symbolic level, this minimally means that community members are no longer being disrespected – as has been the case all these years - at school board meetings. But agreed, this battle wasn't about symbolism. It was/is a civilizational war, called on by Horne, not us. This is the relevance of the opening quote.


As such, victory is what we say it is. It is not determined by a hostile TUSD, a hostile state or the courts.


In the end, whatever the state and the courts determine, TUSD still has to interpret and implement. Because of the district's past hostility, we can not leave it to TUSD to interpret and implement a victory in a manner favorable to the majority in our community, especially since the same superintendent, Dr. John Pedicone, remains in place. Even with the 3-2 majority, the same forces that have defended MAS, need to step forward. But in doing so, one needs the mindset of Victory. That means declaring it, defining it and carrying it through.


In effect, that is what we did during three public forums held by the Federal Court Appointed Special Master in November. The community stepped forward, declared victory and put forth, via the youth, the Declaration of Intellectual Warriors document. The next step requires pressing TUSD, including the new 3-2 school board majority, to implement it in good faith.


At the moment, a large segment of the community wants what's in the collectively discussed and drafted Intellectual Warrior's document. That's one element that has to drive the struggle; it should not be up to the superintendent or the school board or any one individual to unilaterally tell us what we are going to get, or what we are going to win or lose. The document is clear: it calls for Mexican American Indigenous Studies and African American Studies. There is much more that the proposed plan calls for, including dual immersion bilingual education and most importantly, the inclusion of our community into the decision-making process. It is interesting to note that the vast majority of those who responded either in public or online to the Special Master were in full support of MAS, and even more specifically, the intellectual warrior's document. A decision by Judge David Bury is expected shortly.


What's also important to note is that while the desegregation court case only covers African American and Latino concerns, the community, vis à vis TUSD, has the right to petition or demand that the district  be responsive to the needs of all its students, especially those from other cultures, etc.


Again, how we got here was not a magical process, nor was it simple. It was non-stop protests, marches and rallies… and continually addressing a hostile school board and the state, etc. All this required nonstop organizing. And it coincided with the desegregation case that provided our community (TUSD is 61% Latino, though the vast majority are actually Mexican/Mexican American) a voice that was previously ignored.


Another community might have quit in desperation or as a result of exhaustion. But not this one. Much of this will to win indeed can be attributed to the values and ethos that were and are taught within Mexican-American/Raza or Indigenous studies.


Most are familiar with three of the maiz-based values: In Lak Ech, Panche Be and Hunab Ku (in my classes, I teach seven maiz-based values). A fourth value, which comes from the same source (Domingo Martinez Paredez) is "men": Creer, crear y hacer. To believe in, or in this context, to vision, to create and to follow through.


It appears to be the precise same meaning of the opening quote: "It is not what we want, it is what we will."


Precisely: this victory won't happen by itself. The community has to will it, define it and follow through.

These are photos from Idle No More Tucson. Action at Tucson Mall Jan 11, 2013. Idle No More is Canada's First Nation's Peoples manifesting same demands as seen throughout Abya Yalla... namely, the Zapatistas. The Idle No More movement has blossomed into Indigenous suport across North, South and Central America.